High-energy Ballarat printing company Revolution has thrown away the rulebook by installing the high-end, high capacity B2 inkjet press in the Victoria regional centre. Fired up printing partners and co-owners, Leon Wilson and John Schreenan, say they are hugely impressed with the productive power of the latest Konica Minolta inkjet digital technology. Two months after settling the press into its new air-conditioned home, the throughput is driving a massive growth in volumes.

The pair are rightly dismissive of the notion that regional printers should be conservative in their technology choices, pointing to their early digital entry, a benchmark web-to-print strategy and national delivery footprint as ample justification for the new press. Traditional is not what the blokes at Revolution do: they’ve even decorated the new press in company livery to inject more excitement around the installation.

As far as Wilson is concerned it’s all about changing the conversation and the perception of printing as a stick in the mud trade, especially in the regions. ‘Revo’ the über company mascot designed by a local artist, is everywhere, on walls, on marketing collateral and especially in the mindset of the two directors. He epitomises the freewheeling culture of Revolution and its determination not to be typecast as just another printer.

“We don’t want to be the same as everyone else, to do the same thing printers have been doing for ever. We’re a technology company with a lot of energy and attitude. Our culture is more important than the technology we buy,” said Wilson. 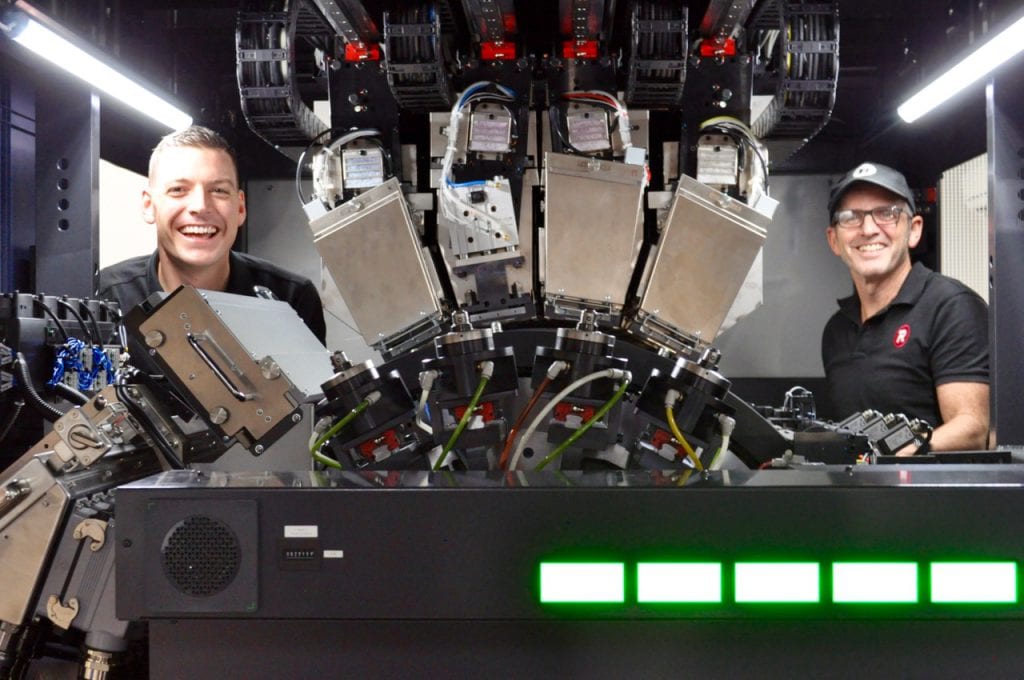 Culture and attitude are two words used a lot at Revolution. They go a long way to defining the drive and enthusiasm that has powered an impressive 50 percent growth in revenue over the past year. With 70 percent coming over the web, the local market still accounts for almost half of the total. The previous 12 months saw the partners expand the business with two acquisitions, one in Echuca, Victoria, the other in Goulburn, NSW.

The AccurioJet KM-1 is destined to become the main production engine relieving the load on its two Fuji Xerox machines while complementing the capacity of the Shinohara offset press out the back. Bedding in a new printIQ production system, Revolution is set to reap the rewards of daring and belief in itself. The next tranche of investments will go to upgrading Horizon digital finishing equipment to keep pace with the multiplying numbers of jobs.

“I’m thriving on the energy. The past two years have been without a break, but we’re on a mission here,” said Wilson.

Part of that mission is to continue to differentiate Revolution from the rest, not only in technology investments such as the AccurioJet KM-1, but also in continuously refining of the company’s software, both in-house and online. The two owners are justifiably proud of their online presence, attributing much of the company’s success to their web-to-print operation.

“People buy a software package out of a box and they think, problem solved. That's why ninety percent of them stay on the shelf, because they don’t have somebody vested in the business that's willing to spend the time,” said Wilson. “You’ve no idea how many hours I spent just thinking about it before attempting to actually set it up and make it work. That's the investment. Ultimately it's what makes a successful business.”

It might be different in the metropolitan areas but in Ballarat, the onus was squarely on Wilson to make the thing work. There are few consultants in the area and even if there were he’s not impressed with that solution.

“I did it all myself. It was a massive job. Some people say to hire a consultant but I don’t think they can do it. They don't know the business. They'll never understand internally what your drive and motivation is and how you want to run your business.

“You also need to know how to manipulate the software, because if you’re pitching to a client and they ask you can you do something, you know straight away how it can be done, because you built the darn thing. It’s about having that confidence.”

Revolution is a very differentiated printing company but in many ways it fits a normal commercial profile. It prints a wide range of materials, ready to take on everything and outsource what doesn’t suit its production. According to Schreenan, much of the difference is what happens to the jobs once they’ve been downloaded.

“We go across a range of products and a lot of other printers do as well. But where it’s different is what happens once it gets to us and then how it gets to print,” he said.

“Our business philosophy is very ‘can do’. Our attitude is extremely different. Seventy percent coming through online is a pretty big percentage. We know it’s a massive number. That's something we’ve worked hard at for a long time. Leon took the base system of online and developed it. We made it work the way our customers need it to work. The software is not one size fits all.  That's the unique side of our business.”

There’s a very natural synergy between the two directors with Wilson first working in the business and then buying in as an equal partner four years ago. Very much the high-energy entrepreneur, he revels in the role of visionary and evangelist. Schreenan is more in the traditional style. After a long career with Fuji Xerox, he came back to Ballarat and transformed the company by investing in digital printing. He’s now the customer service side of the business giving Wilson air to constantly look towards the future.

There are more investments on the cards for Revolution apart from the Horizon finishing kit, but they’re taking a step back from their usual full-on speed. “We’ve obviously made a bunch of investments. There will be more, maybe other acquisitions but lets’ bed this in first. The growth curve is massive and we’re trying to manage that,” said Wilson.

“Updating our MIS is a massive project. We’ve moved across to printIQ, which is the system that will decide the most appropriate route for every job that comes in. But you must realise we’re only using fifteen percent of our true automation capability. We have so much potential ahead of us. “

As only the second Accurio KM-1 in Australia (the first went into Jossimo in Melbourne late last year) Konica Minolta is understandably keeping a very close eye on the operation and lending as much support as required. According to Sue Threlfo, GM production & industrial print, inkjet is such a relatively pioneering technology at the high end of the market that just about everybody in it is new.

“That’s why an innovative organisation such as Revolution has a real market advantage.  When the KM-1 technology is paired with such dynamic forward thinkers as John and Leon, it shows just what can be achieved in the printing industry,” she said.

“The AccurioJet KM-1 is already very quickly having a positive effect for Revolution.  It has the ability to produce such a wide range of jobs so efficiently. Textured stocks, right through to forms and letterheads are proving there are significant productivity gains to be had with the KM-1.  We appreciate Leon and John sharing their passion for the Konica Minolta KM-1.

“John and Leon first saw the KM-1 at drupa in 2016.  From there they reviewed all the available solutions in the B2 inkjet marketplace, and decided that the total offering from Konica Minolta was the superior option. It seems their decision has been a great choice.  At Konica Minolta we are excited to see where the future takes such the energetic innovative organisation as Revolution Print.”